What we've been up to for the last five months

Returning from the dead (less so if you’re subscribed to Simon’s twitter) we bring you news of our scattered and aimless efforts of the last couple of months.

We participated in this years #GBJAM, creating the pseudo rogue/Sokoban-like-like “Super Catacombs”. A few months prior we had in fact already started development of a roleplaying game for the Game Boy, but we halted that project as it was far too ambitious as a first(ish) time endeavour of GB development. #GBJAM then seemed like the obvious opportunity to force ourselves into keeping a realistic scope. 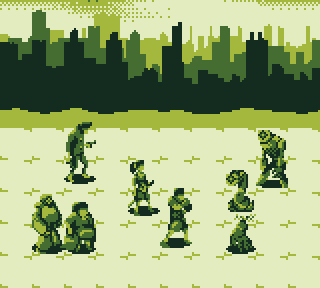 Super Catacombs quickly proceeded to get much too ambitious for us to create in the 10 days that the Jam lasted. Instead we opted to make a compromised prototype showing of some of the ideas and gameplay elements that will be the focus of the finished product.

Time was really hard to come by during the jam which really shows and thus the game isn’t really that fun right now.

We’ve been working on Super Catacombs on and off since the jam and it’s slowly progressing though our focus right now is to finish up Duck Marines.

This is a project that we started a few weeks after the release of Mr. Rescue. The plan was to work on a smaller project while coming up with the idea for our next game. As with all things we do, what started as a simple remake quickly spiralled out of hand.

Things have slowly been coming together during the last couple of months. The basic gameplay features are implemented and almost all of the artwork is done. What’s left is adding in the last few mini-games, doing menus and figuring out what to do about the music.

Most recently we’ve added a second mini-game (the design and artwork for a third one has been completed too), revamped the settings menu, fixed a lot of controller issues and a lot of behind the scenes stuff only Simon would know about.

Back in the beginning of December we added Mr. Rescue to itch.io, which lately has resulted in a steady increase of the game’s download count, and even a few sales, all of which we appreciate a lot! If you haven’t yet checked out itch.io we strongly recommend that you do so. It is a really cool attempt at a self-publishing platform similar to Bandcamp and is already showing a lot of potential.